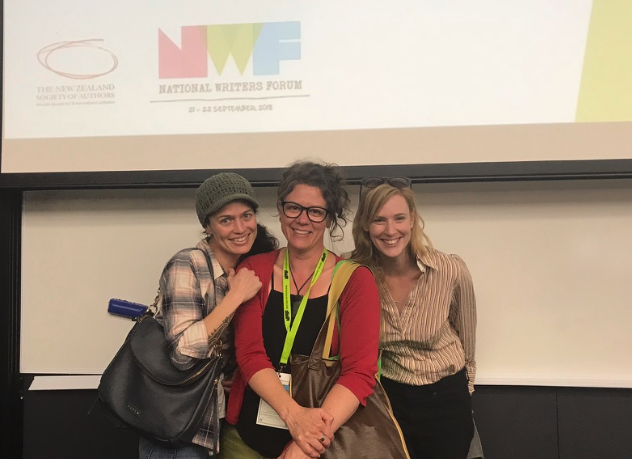 For the briefest moment last month I felt like I belonged to an exclusive club of writers. All six writers on the Te Papa Tupu programme were flown to Auckland for the National Writers Forum. They put us up in a lovely hotel at the top of Queen Street, across town from the University of Auckland where the two-day conference was held. I arrived, exhausted after missing flights and transfers, and lay back on the bed trying to take it all in. It felt a bit surreal: the sound of laughter from the street below, my carry-on suitcase lying open in the half-light and a tumble of books strewn across the carpet.

The sensation was still there the next morning when Whiti Hereaka knocked on my door to take me downstairs for breakfast. Surreal, because Whiti used to be just another author whose work I admired from afar, not someone I ever expected to pick me up to take me for breakfast like an old mate. And yet here she was, sitting in my hotel room practicing Mandarin in preparation for her upcoming residency in China, occasionally looking up to provide an opinion on the selection of my outfit.

Later that night, after all the workshops and panel discussions were finished, I found myself at a table surrounded by a group of authors I’ve followed for years. People whose books were sitting on my bedside table at home. When a plan was made to go out for dinner I almost declined. I felt like an imposter. How to feign belonging? There was only one other unpublished person at the table, another Te Papa Tupu intern, otherwise, everyone else was working on their second, third, fourth or even thirteenth title. I felt like someone had opened the door to the club and we’d snuck in while the bouncer was looking the other way.

Coming home was a relief. Writers’ forums and book festivals can go either way for an aspiring writer. Some sessions leave you motivated and inspired. Others can make you doubt your capacity to fill out forms let alone finish an entire manuscript. I withdrew to gather myself. I wanted to spend less time thinking about the work and more time doing it.

As the weeks have passed and I’ve settled into a rhythm, I’ve found myself returning to ask why I want to belong to this club of published authors so much. Part of it is to do with ego, I suppose. I have identified the pinnacle and I want to know if I can reach it.

But lately, I have started to wonder if, in pursuing legitimacy in the Pākehā world of literature, I am turning my back on the inheritance offered by Māori literary traditions. How much better could my writing become, what potential could I discover, if I didn’t reject the qualities of excellence embedded in oral traditions in favour of those of the written word, but instead held both in my hands at the same time? It’s something our ancestors have been doing for a long time. Perhaps this is the true pinnacle I should be aiming for.