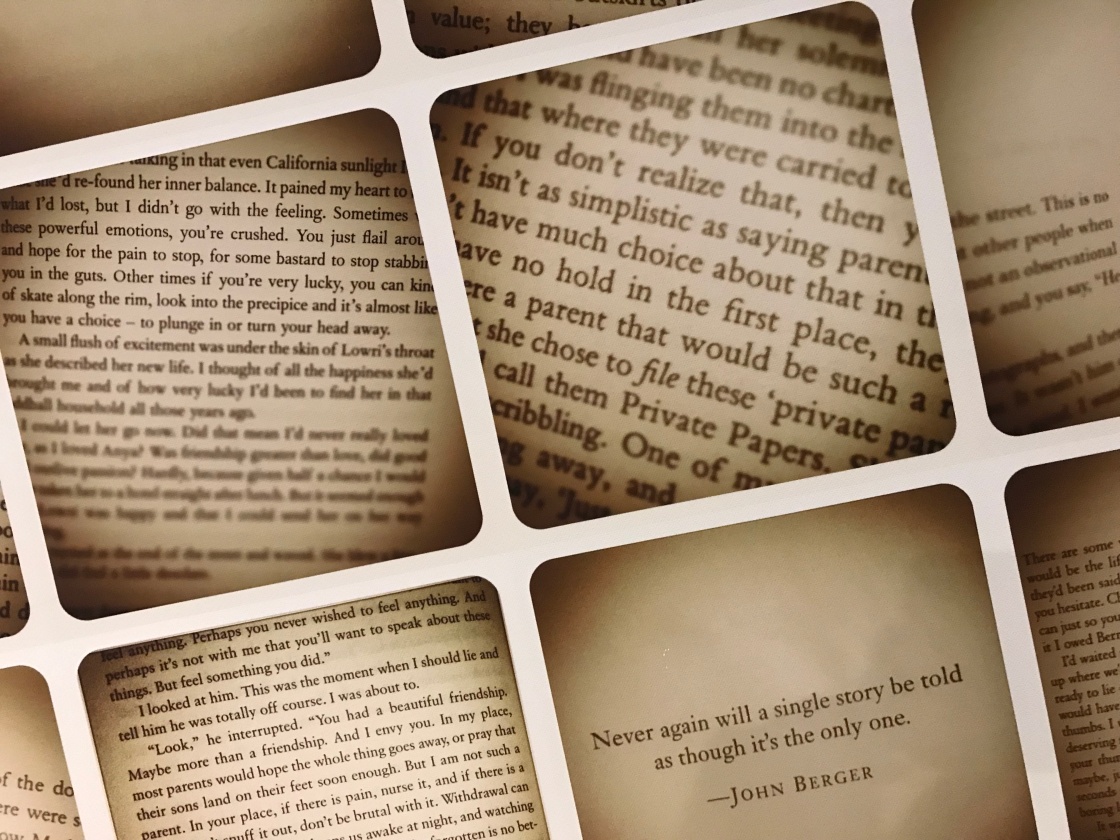 The solid weight of books

This article was originally published in The Spinoff on 28 July 2018.

In 2013 a friend rang to offer me a part-time job working at the New Zealand Embassy in Abu Dhabi. It was a great opportunity, he promised, and I could work flexible hours around the kids.

I was at Starbucks when he called. I looked out across the top of my laptop to Sheikh Zayed Road and turned him down. I told him that the few hours in the day I had to myself I wanted to give to writing. I was a diplomatic spouse living in forced exile. Why not? It was both madness and a luxury.

When I wasn’t writing, I was reading. I churned through a couple of books a week. I read everything by Junot Diaz and Sherman Alexie and Andrea Levy, and all the Booker and Orange Prize winners. One Christmas I read Neil Gaiman aloud to my kids as we drove across the desert from Al Ain to Muscat, nothing but a strip of yellow sand beyond the window.

I tried not to think about the future but when I did my aspirations frightened me. I could imagine visiting international writers’ festivals. Feel the solid weight of my book in my hands. I dreamt about becoming an author the way a kid dreams about becoming an astronaut.

Every morning, after dropping the kids off at school, I drove to Starbucks and, like Lisa Genova when she wrote her novel Still Alice, I took up my seat by the window and wrote. I knew that what I was producing wasn’t very good. I could read my work with an editor’s eye and see that most of it was crap. But I couldn’t or wouldn’t stop.

The aim was to have a finished manuscript by the time we left Abu Dhabi, but on the day I packed up my laptop and waved goodbye to the staff at Starbucks I knew the dream was over. I wasn’t Lisa Genova. I had nothing to show for all those hours and days. Thousands of words that couldn’t be connected in any coherent way. I printed the pages out and sealed them along with my wild and lofty aspirations and shipped them back to New Zealand. I promised my family that when we got back I’d give up the dream and go back to work.

It was a lie, of course. Or perhaps not a lie; just a promise I couldn’t keep.

I enrolled in a total immersion te reo Māori course and my impulse to write grew stronger. I’d start tapping out a status update on Facebook and find myself still going two hours later. I wasn’t thinking about anything except the words. I wasn’t dreaming about literary festivals or the solid weight of books, I wasn’t trying to emulate anyone else’s voice, I was just finding my own.

Towards the end of 2015 I sent one of these long-winded posts to the editors of E-Tangata. They made a few tweaks and published it the following weekend. It was a story about my years as an expat and how I sometimes found it easier to identify as Māori overseas than at home.

I wrote other stories, too, about reconnecting with my absent father and tracing my whakapapa. It’s hard to describe how it felt when my stories found an audience. I think there was an element of surprise. Not just that my writing had met the standard for publication, but that people resonated with what I had to say. I remember sitting in a workshop at a Māori writer’s hui a couple of years ago listening to Paula Morris bemoan the rise of nauseatingly introspective blogs and status updates and I felt like she was talking directly to me. I sheepishly put up my hand and described the type of writing I do.

It seems strange to think that I was writing in a genre that I didn’t even realise the literary world had given a name. But there’s a certain legitimacy that comes from authority. It’s not enough to write. We need other writers to confirm, usually through the process of publication, that we are indeed writers. If reaching this bar is hard for a Pākehā writer, you can be sure it’s even harder for a Māori writer.

A report by Janis Freegard revealed that of 68 fiction titles published in 2015, 91% were written by Pākehā, 4% by Māori, 4% by Asian/Indian writers, and 1% by Pasifika writers. In other words, the chances you’ll hold the solid weight of book written by a Māori or Pasifika author this year, or any year, is slim.

Tina Makareti frames her thinking in terms of unrealised potential. She gave the 2017 University of Auckland Public Lecture; her speech titled “The Heartpost”, described her vision for the whare of New Zealand literature. It’s so good and exciting it makes your eyes water: “Imagine it. The swirling, spiralling, notched lines of poetry; the strong limbs and bright eyes of fiction; various non-fictions in repeating patterns overhead. Imagine the sumptuous kōrero that takes place in this whare late into the night, the breaking away for Aotearoa’s most delicious kai, shipped in from all regions, the coming together for waiata of the most melodious varieties, the drums of the Pacific like heartbeats behind our songs.”

Tina’s speech makes you realise that it’s not just minority voices who miss out when our work is overlooked, but all of us. She asks us to imagine what our literary landscape would look like if we challenged the notion that the only route to legitimacy is through books in print. What about all our other ancient genres of story-telling, from whakairo to waiata to mōteatea? They have always existed and they have always been legitimate.

Nevertheless, the business of publishing remains fundamentally monocultural. Last year, when I finished writing my manuscript, I checked out a few publishers’ websites. Most seemed to actively discourage submissions, or at least to give you fair warning that if you’re unpublished, don’t have a media profile, or aren’t connected to a University or establishment, you probably shouldn’t hold your breath for the six weeks or so that you wait for a response.

The staff and board members on the “About Us” pages were almost exclusively Pākehā. There didn’t seem to be any Māori editors or kaitiaki involved in the selection, decision-making or quality-assurance process. I found no reference to publishing values or tikanga, just notes about what they do and don’t publish. I felt as if I had approached a narrow gate – and it was closed and padlocked.

So I sent my manuscript to Huia. I got lucky. Not just because my manuscript was one of the six chosen for the Te Papa Tupu incubator, but because a cornerstone of the programme is manaakitanga. Te Papa, meaning ‘from the ground’ and tupu, referring to a ‘seedling’ or ‘first shoot’. It’s about creating the environment and conditions necessary to grow and develop Māori writers, so that they can get a foothold on the publishing poutama.

We have six months and we’re expected to put in at least 20 hours a week plus weekend workshops. There’s a stipend so that we can pay for babysitters or chop down our hours of work. Anything to help us carve out the time we need to focus on writing. It’s not a windfall, but in my case, enough to justify a return to voracious reading. The role of our mentors is to shepherd, or akiaki us, through the long days and even longer nights as we polish our work until it’s perfect.

Huia’s role is to oversee the programme on behalf of the Māori Literature Trust. They facilitate workshops for both mentors and mentees, and let us know what we can do to position ourselves well for publication. But acceptance into the programme doesn’t mean you’re guaranteed a deal. This isn’t patronage. This is a submission process, tikanga Māori style.

At our first workshop, Robyn Bargh, chair of the Māori Literature Trust, talked about the genesis of Te Papa Tupu. Its roots lie in the Huia short story competition, now over 20 years old, which aims to find and recognise emerging Māori writers. The competition attracts hundreds of entries every year so there’s no shortage of us.

But it isn’t always easy to transform a talented short story writer into novelist. Not everyone can afford to enrol in a Masters in creative writing or to quit their jobs for a dream. And regardless how many Māori writers make it into print, our numbers are still far fewer than non-Māori. That means we have fewer role models, fewer mentors, fewer well-connected people sitting around the decision table. All writers face barriers of a lack of time and money. Writing is both madness and luxury. But Māori and Pasifika writers face these barriers and a whole raft of invisible ones as well.

Like the idea that more needs to be done to “help” Māori writers. This is the thinly veiled assumption sitting behind many a well-intentioned discussion about the lack of diversity in New Zealand literature. Not only does this deficit approach put the focus of the problem on Māori instead of mainstream culture, it also ignores the wealth of Māori literature already in print (such as the four volumes of mōteatea collected by Sir Apirana Ngata nearly 100 years ago).

It’s also ignorant of the way in which one issue or problem can exacerbate another. I was talking to a friend about literary festivals recently and he asked me why hardly any Māori ever turn up to these things. Where are all the Māori readers? he wondered.

“Is it that Māori don’t read,” I asked, “or is it that there aren’t enough books out there we actually want to read?”

When I was at high school, my enjoyment of reading was almost stripped out of me by characters I couldn’t relate to, landscapes I’d never seen, conflicts that had no bearing on my life. Years later, in the midst of my reading marathon in Abu Dhabi, I discovered Bugs by Whiti Hereaka. It made me laugh and cry and ache. Here I was, on the other side of the world, finally finding a voice and a language of home that spoke to me.

Since the first Te Papa Tupu incubator eight years ago, there have been four intakes and a total of five books published, with more in train. At least two from the programme have gone on to win awards, both nationally and internationally, and hundreds more individual writers published in the Huia short story collections. This is what Huia is passionate about. They’ve been publishing Māori authors long before the word diversity became fashionable.

Which kinda proves we don’t need Pākehā institutions to write a diversity policy for our benefit – although they could for their own. We don’t need mainstream institutions to find or launch or legitimise Māori writers. We can do that ourselves, through platforms like E-Tangata, The Spinoff Ātea and Pantograph Punch. Māori writers are already writing – in coffee shops and on marae and on our Facebook feeds. We’re already telling our stories, on the pae and online, in poetry slam comps and on stage at Te Matatini. We don’t need special treatment, we just need sufficient space and the right conditions to allow us to emerge.

As the universe would have it, Whiti Hereaka is one of the mentors of Te Papa Tupu. She came through the programme herself, which is how I ended up holding the solid weight of her book in my hands on the other side of the world five years ago. Now she’s giving back to the programme – Māori writers helping Māori writers to dream.