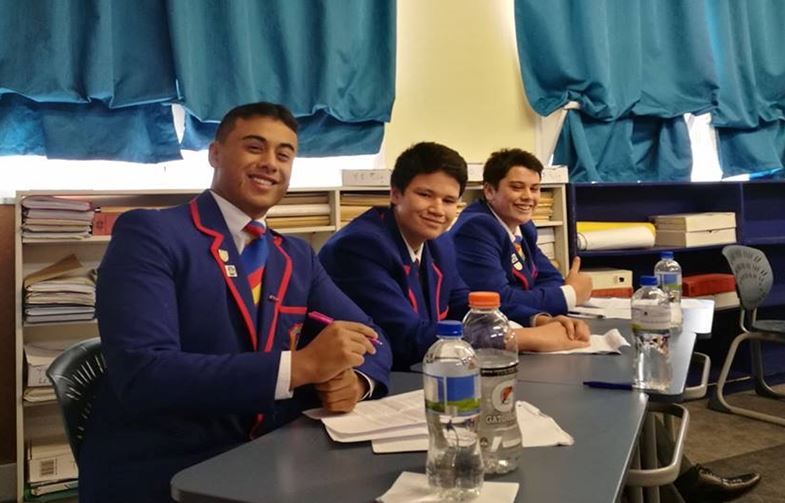 It shouldn’t be a debate: Our schools need to stop prioritising Pākehā values by default

Here they are. The Hato Pāora College debating team, about to take part in the annual O’Shea Shield a couple of weekends ago. The room is prickly with anticipation. This prestigious speech and drama event involves 17 Catholic schools across the lower North Island, and draws massive crowds. Spectators, my son and I included, jostle for a seat. When the chair of the debate stands to read the moot, a hush falls over the room. He introduces the speakers and opens the floor for the affirmative team to begin.

The first speaker from Hato Pāora, a Māori boarding school in Feilding, rises to his feet and clears his throat. Shoulders back, he casts his eye around the room. He acknowledges first the chair, and then the adjudicator. He speaks directly to the opposition, hand extended, and wishes them luck. He thanks the teachers that have helped them prepare for the event, parents and whānau who’ve come to watch, and all their school mates.

In a Māori context, opening a speech with a mihimihi, or a round of acknowledgements, is fairly typical. Depending on the occasion, these introductions can be long or brief. It’s a form of respect, with speakers often just as likely to acknowledge the people who aren’t in the room as they the ones sitting right beside them. These unwritten formalities provide a certain structure, but they’re not hard and fast rules. They’re flexible, and can be adapted to suit all sorts of situations. Even, if you like, a high school debate.

Unfortunately, the judge of the debate didn’t see it that way. He referred to Hato Pāora’s ‘effusive praise’ as not only unusual, but quite unnecessary. Long introductions waste time, he said, suggesting competitors would do better in future if they just got stuck straight into their arguments. He also reflected on the metaphorical references used to humorous effect by Hato Pāora. Entertaining though it was, the purpose was unclear as none of it really served to advance their argument.

It was a throwaway comment, no offence intended, but it’s a reflection of the unconscious bias that lies at the heart of New Zealand’s education system. The kind of bias that most of the time people can’t see because Pākehā culture is hidden inside words like “normal” and “traditional”. Certainly, the judge’s criticisms about long-winded introductions and over-imaginative wordplay is valid in terms of a traditional Pākehā debate.

In a traditional Pākehā debate, the roots of which can be traced to Ancient Greece, the primary goal is to win. It’s a contest of logic, style and strategy. Competitive debating undoubtedly develops an invaluable skill set – the very cornerstone of modern democracy. Teams are judged on their ability to present arguments that are logical, consistent, and emotionally appealing. Time is of the essence. Points of information, or interjections, are a way of exposing the weaknesses in your opponent’s argument while they’re in full flight.

But what if we take a traditional Māori perspective? The purpose of tautohetohe, or Māori debate, is less about beating the opposition and more about achieving consensus. That’s one reason it can take so long, years even, for important decisions to be made. Pākehā are often critical of this process, because it would be infinitely faster and practical just to put tough decisions to a vote. But in te ao Māori, fairness is not always a function of numbers.

You’re unlikely to hear points of information in a formal Māori setting either, because standing up to interject while someone else is holding the floor is generally accepted as a no-no. The real skill in tautohetohe is in listening. No notes, no aids. I’ve seen people stand after several hours of debate, returning to address each speaker point by point.

More often than not, a good tautohetohe is entertaining. It has to be, because it can go on for such a long time. That’s why metaphor and word play feature so prominently. Why not have a laugh while you’re trying to convince someone of your point of view? Humour is often just as persuasive as logic, after all.

While the historical traditions of Pākehā and Māori debates are equally valid, like so many facets of our education system, only one tradition is ever really acknowledged – the Pākehā one. It’s a bias that is sometimes blatant, other times so subtle you can’t always put your finger on it.

One of the Hato Pāora boys described it this way: “It just felt as though the judge was saying we’d done something wrong.”

That’s a real shame when you consider that not only were the boys being respectful, they were following tikanga Māori. Is it fair to be criticised for representing your culture? Sure, the boys could have shortened their mihimihi, and played down those metaphors. But the point is, should they have to? Should Māori kids have to stop being Māori, in order to succeed in education?

In policy, references are always made to “the gap” between Māori and Pākehā. People talk about “levelling the playing” field, “the long brown tail” and the need to “lift” Māori rates of achievement. It’s an emotionally charged language that continually puts the spotlight on the failure of Māori, rather than the failure of the system.

There is never any discussion about what Māori have to give up, sacrifice or leave at the school gate in order to achieve in the classroom. It’s not that Māori can’t compete on Pākehā terms. Of course we can, and we do. But in all this talk of a level playing field, when do we ever propose having a home game? I’d like to see how Pākehā kids fare in a tautohetohe. There’s never any discussion about that, though, because everyone readily accepts that the playing field is a Pākehā one. The turf is not up for debate.

The mono-culturalism of our education system is no doubt a key reason Māori kids drop out, or are stood down, at a rate more than double their Pākehā peers. Of those kids that do stay on until Year 13, only three Māori out of 10 school achieve NCEA Level 3 – half the number of Pākehā.

There are other options, of course. You can by-pass the inflexible Pākehā system, where things like achievement and success are narrowly defined, and send your kids to kura kaupapa and wharekura. It’s a good choice. The evidence shows Māori kids thrive in a total immersion environment. But it shouldn’t be a case of one system being better than another depending on ethnicity. Parents ought to be able to send their kids wherever they like, and have equal opportunity of success regardless of what system they’re in.

Change is slow. When I was growing up in the 80s, racism in the playground was rife. I knew I was Māori, but sometimes I wished I wasn’t. These days, people like to think things have improved – that Māori kids can walk into school each day feeling proud of who they are. But recognition is one thing. We still have a long way to go before we can say our education system truly reflects and upholds Māori values, language, customs and knowledge.

It’s a process that begins not with Māori kids, but with the people who influence and shape the system they learn in. From teachers in classrooms, to policy makers in government, to adjudicators in high school debates. It is time that our system truly examined the unconscious bias that sits at its core, privileging one ethnic group over another.

It will require people to hold up the ideas and values they have absorbed invisibly, and look at them in a new light. It will mean being open to the ways in which our education system can be improved and enriched by Māori cultural values, as opposed to burdened or threatened by them. It means making room for Māori knowledge at the centre of the discussion, as opposed to on the periphery. It means discarding words like “traditional” and “normal,” as though these words reflect facts we all agree on.

Above all, it means praising instead of penalising Māori kids who have the courage to turn up and compete on Pākehā turf every day, all the time holding on to the values that define them.

This article appeared first in The Spinoff on June 1st, 2017.