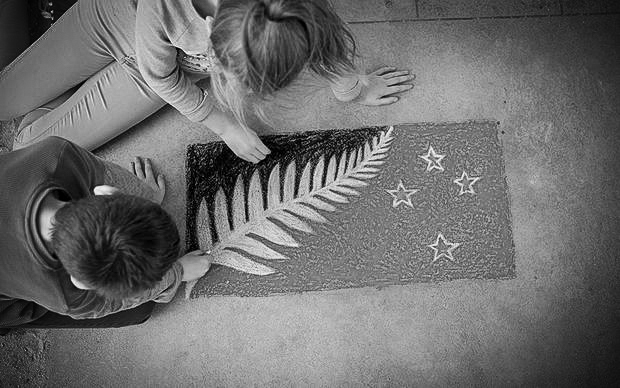 Leave the flag decision for the kids.

The other day we got a letter from our 13-year-old son at boarding school, wanting to know which way we were voting in the upcoming flag referendum.

I immediately went into a spin. Not only did I have no idea, but two weeks out from the 24 March deadline, our voting papers hadn’t turned up and I didn’t even care.

This is the kid I once lectured, at length, about the difference between a dictatorship and a democracy and why we should never, ever squander the opportunity to vote. The same kid I often subjected to news bulletins of riots, telling him he should never treat the political process cynically when there are people in some parts of the world who are willing to die for the right to vote.

Sometimes, I think life likes nothing more than to make a hypocrite of me.

Because the truth is, I’m deeply cynical about this whole flag thing. I’ve listened to all sides of the debate and feel utterly disconnected. I’m ready for change, but can’t get excited about a floating feather on blue and black (or is it blue and red?) background. I felt briefly inspired when Red Peak came along, but changed my mind just as quickly. I couldn’t really say why.

Then, last weekend, I went to a debate about national identity with a panel of young writers and thinkers, which helped me understand the roots of my cynicism. This was a thoughtful, hour-long discussion about our identity in which we didn’t even talk about the flag.

Someone raised it briefly in the Q&A, but for most of the hour the conversation was about New Zealand identity as the embodiment of a particular set of values, as opposed to a collection of design elements. That’s to say, “who are we?” — rather than “hey guys, which stencil looks better on my cheek?”

I immediately went home and drafted my letter.

I know your generation cares very deeply about the flag. This debate has really captured your imagination — yet you don’t get to vote next week.

Don’t worry, when your time comes, we’ll be ready to re-open this discussion. And you’ll know that the first thing you must do is listen to what people have to say.

Rather than dividing people, changing the flag could be an opportunity to look back and heal, and to look forward and celebrate as a truly bicultural nation. You’ll know that the symbols that are ultimately chosen to represent us need to mean something. They’ll reflect our history, and say something about the values that we want to define us at home and around the world. People might scoff and say it’s a waste of time and that it won’t change anything.

But ignore the cynics. You can make a difference. Your voice matters.”

My husband, who’s voting the other way, looked a bit peeved when he read my letter. “But you haven’t presented a balanced argument,” he said. “What about what I think?”

I smiled and threw him the pen and paper. Then went off to call the electoral office and chase down those voting papers.

This article first appeared in E-Tangata on 20th March 2016.